Winter is over, at least as far as I’m concerned. The blue wheels have been remounted on the hubs and the stockers are in my friend’s shop, nestled under a work bench he claims to work at but I don’t see much work goin’ on there. Come to think of it, I don’t know why my tires are there in the first place, as I have a perfectly good shop of my own, but alas, I don’t mind them not being around. I don’t much care for them anyhow. While the car was suspended above the ground, I also rewarded her with another oil change. Three this year. Not too bad. In the year that I’ve owned the car, near 17,000 miles went on by under the rubber, some of which I have left behind when driving more aggressively than I ought to be. A great year of driving. The best in my nine of doing so. 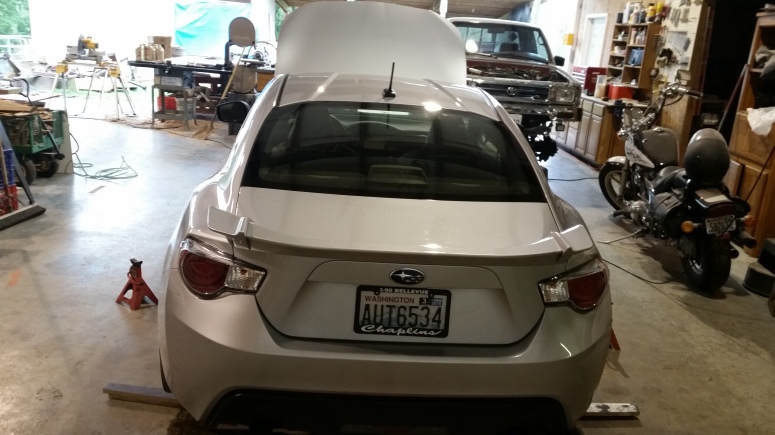 I wish I had more to report for this BRZ update but it was fairly straight forward. Not even a bushing upgrade. I should have done something like that. What else is in the picture above? A Honda motorcycle and a Toyota Pickup with some fairly ambitious happenings in its not so distant future. They claim they will do an engine swap. We shall see. Here is a shameless plug for any eyes belonging to car fellows to buy my recently launched short story duo Alone in the Desert. Your help would be greatly appreciated.

They say a man’s worth is directly related to the width of his tire…well, score one for the car folk. The Toyota pickup tire loses!  Actually, I don’t much enjoy the Federal Super Steels. They are okay but nothing great. In fact, I’g do so far as to say that if they are in anything but dry, warm weather then their grip is less than mesmerizing. They were a band-aid at the time since I’d spent a healthy sum of money on wheels, suspension, mount, dismount, powdercoat, etc. I’m about ready to rip the band-aid off and acquire some Direzza’s or Proxes or something extreme. Then again, I don’t anticipate much rain to be forthcoming. But what will hopefully be on the mechanical horizon, power. And lots of it. And such additions require a more extreme tire.

Lately, under the rather vapid mind set of you only live once, I’ve had an almost perpetual desire to add forced induction to the equation. At first I was thinking supercharger, specifically the Sprintex/Innovate SC for the glorious whine it makes as the car crescendos through the power-band. However, the affordable Super Charger from Sprintex gets about 230-250 at the wheels. Max. This is a great number, one I would not be bummed to have under my wheels. But I’m a man of deals and things per dollar. For example, I agonized over which tub of protein got me more servings per dollar. A good twenty minutes before I made a decision. Now, if 3-5 thousand dollars is on the line, I agonize. And worry. And think all the worst things but then remember the best: how fun the car would be. But here is the dilemma: for the same cost I can get a turbo and be at 250-300 horsepower at the wheels.

Like anything which warrants comparison, there’s a laundry list worth of pluses and negatives for either set up. Turbos are a bit more dangerous to the engine, at least in my mind. They run hot, and this engine already likes to boil after a long, playful drive. Both Forced Induction (FI) solutions make great noises, the supercharger however doing more for my ear than the turbo. Plus, with a SC you can still upgrade the exhaust components behind it for not only more sound but a lovely chorus, the main modification being header/exhaust manifold. A turbo does not allow for this. You can upgrade exhaust, mid-pipe etc, but are limited to an equal length header. A header style I would likely choose anyway if I went with a SC. Either way, I have much to consider. But I don’t think there should be, as you get so much more with the turbo kit than the SC. The problem, of course, is my lust for the SC whine and linearity of its power delivery.

The last thing I will highlight in this post is that I got to borrow my friend’s GoPro. It’s a pretty nifty little gadget. He has the waterproof case and another bit of mounting hardware. I removed my factory tow hook from the trunk and then we placed the go pro mount on the tow part of the hook and then I wound a bunch of electrical tape around it for added insurance. Then I popped off the plastic tow hook cover on the front bumper and turned the tow hook till it would turn no more. Viola.

GoPro takes pretty decent pictures but struggles in low lighting conditions. Under the perpetual grey of Washington, this poses a problem. I of course recorded footage of me driving some nearby back roads which I may upload. Who knows.

Until next time (FORCED INDUCTION???) Drive safe. And as a fellow who talked to me about my car pontificated, “Keep the rubber side down, brother.”