I ought to update more frequently. These delays are bad. Real bad. We’ll start with a few housekeeping links:

Check it out! Though it costs a paltry dollar, this dollar carries me a long ways. Thanks.

This is where we left off: 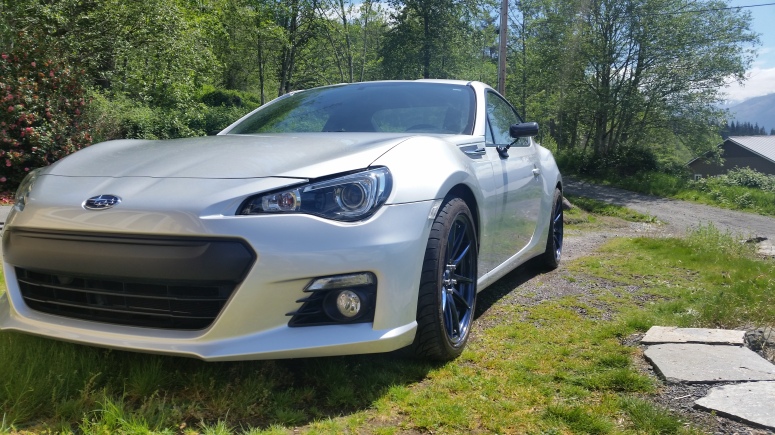 And this is where we are now:

Nearly every time I descended the cedar steps of my porch and ambled around the edge of my house, my gaze was drawn to a specific area. It was brutal, black and horrific. An abyss. The claimer of my eye: the gap between rubber and fender, specifically on my fronts, where those massive vertically rolled fenders reside, begging to be filled to full capacity. Without doubt, the front fenders are the most visually striking area on the Twins, followed next by the broad, low sloping hood. There, in that place of sculpted beauty, lingered a three finger gap. It was bothersome, as I felt like it detracted from the uniqueness of my powder coated 720Form GTF1’s.  This eyesore may not draw a second glance from anyone who isn’t a car enthusiast, but I, being one of such ilk, let this nuisance blossom into a serious psychosis. Often I would  walk to the window and stand there staring out it, this darkened figure between pulled back curtains. Like some wraith. If ever a passerby came on through, the image of me standing there before the window would no doubt inspire horror, for what could a motionless man constantly at a window inspire other than that. Being in the woods, no passerbys happened along. Just as often as I would loom at the window, I would wander outside. I’d circle my car and stoop down and place my fingers between the gaps, crudely measuring the variances between all four corners. Three on the driver front, three and half on the passenger front, one on the rear passenger, two on the rear driver. I would do this often, hoping for a different result. Psychotic, isn’t it?

I’d been thinking about coilovers for a good long while, but the affordable set I wanted had been out of stock. Such a popular set were these coils that they sold out almost instantly after arriving from Japan. One night while browsing on my phone, I happened to refresh the permanently concealed tab for ft86speedfactory.com. The page loaded. I sat on my couch looking at the product images as I’d been wont to do. Bright green suspension system. I allowed myself to imagine what my car might look like without a gap. Then I realized an anomaly. The coilovers were in stock. Almost immediately, I added them to my cart and before long I was hitting the little Pay Now button the color of hazard signs. By the week’s end, there was a large box embossed with a made in Japan notification. This didn’t please me for any JDM tuner reasons other than I knew to what level of quality they’d been manufactured with. The morning after I’d purchased them, they were out of stock. They are on back order till October. I later read they were only available for a couple hours. I guess we’ll call it mechanical fate that they ended up in my possession. And I could not be more pleased with everything they provide. 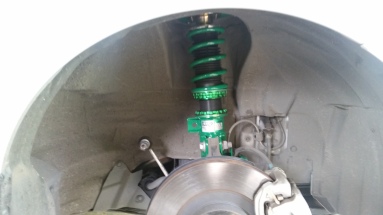 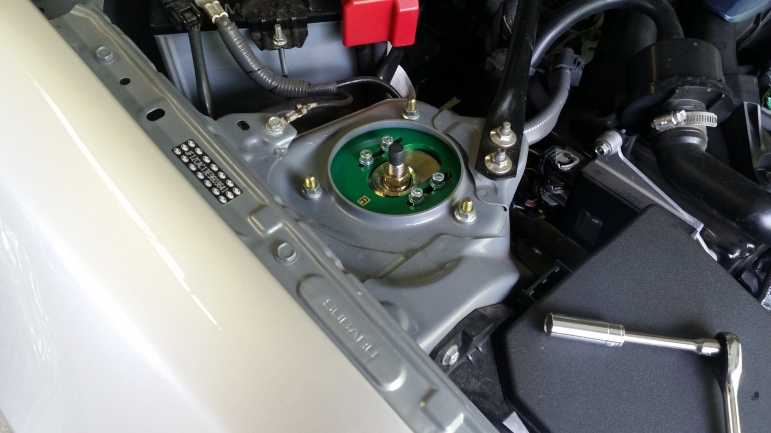 History repeats itself, so they say. And with such logic imbibed I stressed a good amount about the install. Slipping the RCE yellows over my stock struts and shocks proved to be an endeavor my friend and I were almost not equal to. For various reasons, problems wormed their way into what should have been a relatively painless experience. There was much pain. Not wanting to ask my friend again to commit to something I thought would only provide anguish, I instead trudged onward with no one at my side, save for hope and a vision for what the end result may look like. The install went great! There were a couple instances where troubles arose, but having a much better grasp of how everything down there connected, I managed to navigate through the turbulent times. They went on in a couple hours. I’m sure I could continue to cut my time down, maybe to 1.5 hours. In order to do this whole ride height meets performance thing proper, I also purchased adjustable lower control arms. 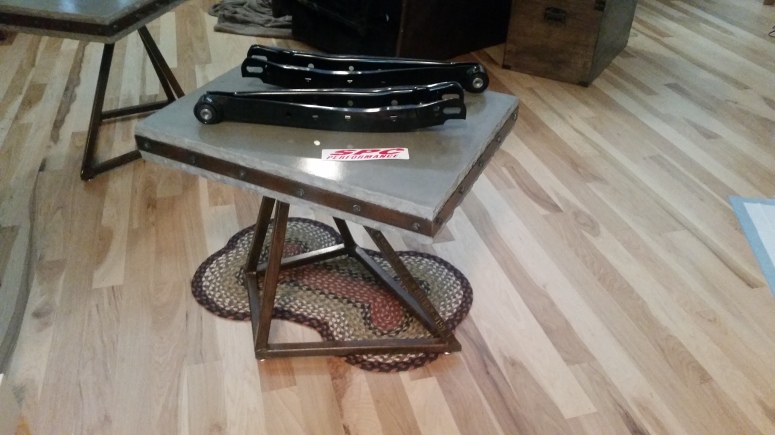 I had these installed by the alignment shop. They charged way too much for it, in my opinion. I had my front camber adjusted to -2.2 degrees, 0 toe. Rear camber to -1.0 degrees, 0 toe. Wow! I had forgotten what it felt like to have straight line grip! The car instantly felt more snappy; it was the first thing I noticed. The header definitely made a difference, it was just less pronounced when I wasn’t actually utilizing all the tread. Prior to the alignment, my rear camber was at -3.9 and -3.4, respectively. Those are big figures, figures that are damaging to acceleration as well as vehicle dynamics. The front grip now is welcomed, if not a bit overwhelming at first. What I mean by this is that the rear end moves about a lot more. Very adjustable. It’s a lot of fun. It’s the way it ought to be.

If I had to make a comparison to stock, I’d wager I’m near 2″ lower than a car off the assembly line in Japan. On the Ft86club forums I saw a measurement from ground to fender of 26.75 inches. On my alignment sheet I’m at 24.5 inches. I don’t know that I believe I’m lowered two plus inches but there is a good chance. It feels low. I can place my hand flat on the ground with very little effort when manning the helm. Overall, the driver experiences an overwhelming sense of a low center of gravity. A solid, immovable feeling on the road. And with this low mass there also follows a supreme level of confidence when accelerating at the apex of any turn worthy of mechanical effort. There is a distinct gripping sensation that moves up through the seat, through the chassis–the driver can register the rear tires clawing into the tarmac. The engine growls and climbs and growls again with no ostensible chatter, just a willingness to push the car to whatever limits it may have. Aggressive driving on public roads seems to provide no remark worthy challenge for the front tires. Turn in is sharp and quick. Sudden.

The Tein Flex Z coilovers are a great value as well. I have set all four corners back 3 clicks from full stiff. Immediately, the driving experience changed. The whole chassis feels stiffer, more cohesive. Everything working with everything beside it, small undulations travelling up through the seat. Cracks in the pavement permeating through the steering wheel. For some people this might be uncomfortable, but for those who appreciate the act of driving, this feedback is welcomed. The car feels planted, quick, precise. The ride is also more comfortable than both stock and RCE springs. No harshness. It’s stiff, but not brutal or sudden. When they come in stock again, I’d recommend you consider dropping your car on some Flex Z’s. You won’t be disappointed.

I installed Lamin-X Foglight tint, merely for an accent to match my wheels. I don’t use the fogs.

Being on 235/40’s tires, I have about .6 to .8 inches less diameter than most people run. As a result, my rear fender gap is about 1.5 fingers, even with coils, but the ride is level. Though this bothers me a bit, having some room for travel is a good thing. The car must have a bit of a natural rake. 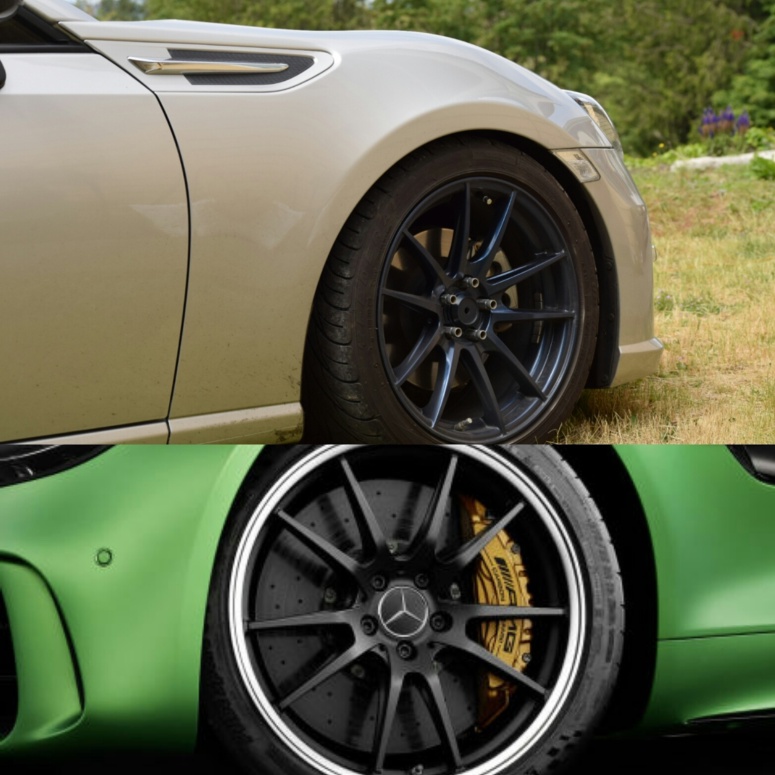 AMG GT-R wheels look pretty similar to my 720forms. I can barely can fit my thin finger between rubber and fender. Speed bumps have become a major obstacle, one which elicits a grimace from my features when I hear metal on concrete. 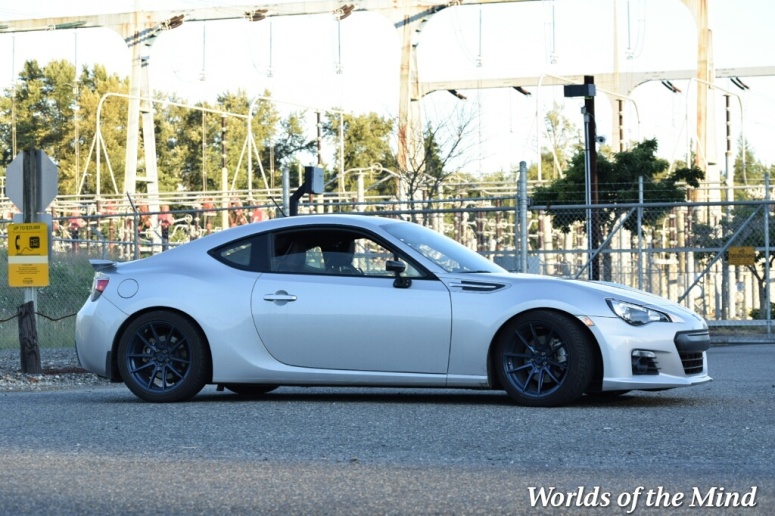 What next? I’m thinking a duckbill spoiler, perhaps a front lip.

Until next time, keep the rubber side down!