In an effort to save money I have instead devoted my automotive energies toward creativity. Although these items did cost me a shtickle of money, it was not an amount that should cause even the shallowest of pockets to despair. As for the one actual pseudo-performance modification I’ve done as of late: Perrin Steering Rack Lock Downs. To say I was expecting a ton from these nifty little red powder-coated blocks would be a lie. I thought perhaps the steering weight would offer a small measure of increased resistance. A certain amount of road imperfections to tremble through my fingers curled tightly around the wheel. These sorts of somewhat mundane things.

Never did I imagine what a sweet little difference they would make. No longer does the steering wheel soften mid-corner when the rubber steering rack bushings would normally compress due to inertial forces–it instead remains rigid. And due to this enhanced rigidity, the driver initiates less corrections mid-corner and thus it seems the tires are required to work less. Indeed, the driver is not engaged in a grappling match with the wheel at high speeds–the wheel is now an extension of his shoulder. Remember, drivers, athletes, and those who do things which demand any manner of finesse, all small movements should originate from large muscles. Large muscles deliver precision. Write from your shoulder. Steer from your shoulder. Swing with your hips. Kick with your hips. Small muscles are quick twitch, and they respond accordingly. That being said, the Perrin Lock Downs allow for more precision, the driver inputs less corrections, and the tires can do their job. Just point the wheel and hold the line and brace your knees against the cockpit and hang on and smile.

I failed to acquire install pictures, as I became somewhat frustrated, but hopefully this shot of the car on blocks of wood illustrates the torture that is jacking up a vehicle which stands but four inches off the ground.

Arts and Crafts with cars!

I’ll make this a thing of brevity. So in need of center-caps were my wheels that even a co-worker commented on their absence. And so into my heart did these words go that I went to the local automotive store. A familiar place. The smell of grease. Faint aroma of coolant. Heat from the tarmac outside sailing in through the open door.

I proceeded past the center displays of things nobody should ever purchase but purchase them they do indeed and slipped into the paint aisle. Stood there with arms folded and mentally compared the colors along the wall to my new wheels. For the sake of my pride, I will not divulge what color I chose, for it is rather embarrassing that I spent a small fortune on a color an American Manufacturer at one time seemingly produced. The color is depressingly close. I tell myself the center-caps lack the trick shades that my wheels possess. A certain depth is absent from them. These sorts of things. Sometimes if you believe hard enough in a lie it becomes a truth.

But with this American automotive paint I would do more than paint my center-caps. Pop open the aluminium hood/bonnet on the GT86 and it becomes apparent that the mechanics concealed below are not instruments of beauty. Indeed, the engine bay is of a rather bland appetite. However, what one should instead realize is how intuitively the engine is laid out. For a modern motor, the FA20 in the GT86/FR-S/BRZ is rather accessible.

But, being a fan of color, I removed from the engine components the Valve Cover-cover and accessory covers and proceeded to paint. 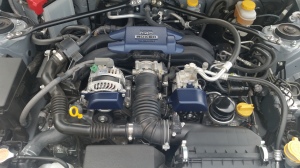 Next comes the challenging arts and crafts project: Wrapping the steering wheel in Alcantara.

If you haven’t conceded to purchasing the 500-900 dollar variants for the GT86, you can settle for slightly less and wrap the steering wheel yourself! A DIY will be constructed in the next post. In the mean time, here is the finished product (I could do it much better if I were to try again, with hidden seams and accent stitching…. Learn from my mistakes.) 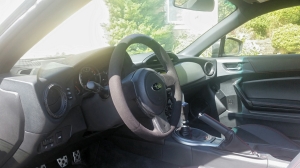