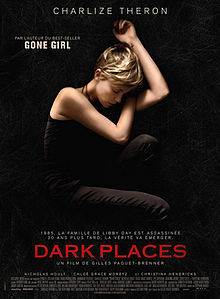 The second adaptation of Gillian Flynn’s work has now arrived, the predecessor being the well received and handsomely earning Gone Girl. Undoubtedly, though probably not just, Dark Places will be compared to its more well-known counterpart, where it will not fare nigh as well (I fall victim to such comparisons starting…now). There is a magic to Fincher that is easily appreciated after watching Dark Places. The way he captures both the dream and nightmare of any one instance all at once. The pace he unfurls a story and promises what will come only just but then draws back so that the viewer remains engaged.

The first thing that struck me about Dark Places was the commonalities it shared with another author’s work: Chuck Palahniuk’s Choke, both novel and film. And indeed, Gillian Flynn’s writing style, a combination of frankness and wit, seems to be inspired by Mr. Palahniuk.

Much like in Choke, the main character wanders along an odd moral ground–not quite moral or immoral—and manages the financial aspects of her stunted life by abusing the courtesies of others. Charlize Theron, sporting a rather masculine look, plays Libby Day, the child survivor of a brutal slaying that transpired in her farm house in the late 80’s. The lives of her mother and two sisters lost in the dead of night. Young Libby and her brother escaped the incident unscathed but still forever scarred—a constant theme throughout.

Fast forward to a much older and yet still troubled Libby Day, and we find her finances are dwindling. A book she “wrote” detailing the events of that night commands earnings no more. Grieving individuals across the nation no longer send her consoling cards filled with money, to which Libby had only returned a form letter offering shallow gratitude. A description of how much she has suffered. How all this helps. People move on, find different murders to be fascinated with. Four hundred dollars and two months behind rent, this is what her attorney tells her as he hands her a stack of mail, plopping it down like some final verdict as to what is to come. Like a burden.

In this stack of mail Libby finds an offer to earn money. A bizarre club that is fascinated with crimes would like to pay her to comb the dark places of her mind, search for what may be the truth in those buried corners. Young Libby, mind in a broken state, had fingered her 16 year old brother, Ben Day—played by Tye Sheridan and Corey Stoll in young and old versions, respectively–as the murderer of the family. Young Ben Day was a fan of heavy metal. Misfits. Metallica. Satanism and sacrifice and the worship of all things odd. And thus the media at the time railroaded the young man he was subsequently locked up for the slayings, despite a lack of substantial evidence and motive. Despite Libby’s bruised mind. At this point, the movie seems much like a combination between Choke and the real life mystery of the West Memphis Three. Ben and Damien Echols seemingly cut from the same cloth. Old Ben, calmly idle in prison with no malice and seemingly no desire to obtain freedom, even writes poetry. By all accounts, a lovely man, as Libby is told; she has not visited him since he went away.

Desperate for money, Libby contacts the leader of the hobbyist detective group, Lyle (Nicholas Hoult). She then attends the murder club, inside which is a veritable carnival of odd souls. Role playing games of crime scenes are acted out, snapshots and forensics and all. Odd icebreaker jokes which only freeze the ice further. But at the back of the club, there reside the true enthusiasts. Those who focus on solving crimes, not vicariously living out something from long ago.

After a time, Libby agrees to play along. She then demands more money and eventually finds reason enough to begin doubting what she believed had transpired that night. From there, the movie jumps back and forth between past and present. Sometimes the screen is in grainy black and white POV footage of Young Libby escaping the house, others it is omniscient of all that is happening. Libby begins to visit Ben in prison. Searches for all the old players of that time. Finds her father in a toxic dump. Yes, you read that right.

The cast does a commendable job. Christina Hendricks as the mother, Patty Day, somehow seems strong and vulnerable all at once. Chloe Grace Moretz does her job well as young Ben Day’s girlfriend, violent and bizarre and persuasive. Charlize Theron requires no descriptors. Still beautiful in a baseball cap. The problem with the film resides in the circumstance and improbability of it all. Yes, people are intricate and multifaceted, often never to be understood, but how many people can do their absolute worst all at once? Just doesn’t seem plausible. And if it indeed is, then I am thankful to have never been in the midst of such a storm of chance and malice.

The theme of the film is largely about prisons, both physical and immaterial. Guilt and sorrow and protecting those whom you love, even if to a fault. And indeed, all the love in this story is not without fault. All participants have someone they love and all fail to be just in the moral sense. To do right by what is right and nothing else–something all conscious beings should strive to do.

As far as technical critiques–I often found the picture to be a bit muddied. Drab and dreary I am fond of, but not muddled, especially when it seems there is no purpose to the muddled imagery. Sound played almost no vital role in the film. Fincher, who started as a music video director, uses music in such a way that it too is part of the story. Settling a viewer in. Luring them to sleep. Waking them from a nightmare. And sending them along to whatever follows. There is not a single memorable moment of audio in Dark Places. Nothing impactful. Location seemed to be a critical role in the story, yet the film failed to capture it. The almost innocent nature of farm life and being distant from the world nothing more than a hollow promise that not even a few sweeping shots of sprawling land could deliver on. Having not read the book, I can’t say whether or not the movie was too improbable, or the source material itself.

Though the review may sound a bit harsh, I did enjoy the movie, my bitterness toward it likely derived from the fact that it ran $12 on DirecTv PPV. If you want the snark and attitude and honesty, go see Gone Girl or Fight Club or American Psycho. If you want the reality of it all, just look up Damien Echols.