Film: A visual barrage of beauty and horror which can’t save the film from its non-existent story.

I purchased the film Ex Machina and sat there on my couch watching the previews as the Blu Ray player ticked on. An eclectic array of interesting films—a welcomed joy. But one particular film burrowed into my mind and disseminated through its every winding synapse like some dark poison. Scarlett Johansson’s wan expression as she walked through gloomy doorways in a seductive manner, curious men following at her rear. A spectacular shot of her in the fetal position amongst swaying trees. Gloomy. Grey swept. And finally, her running through the trees of a dense forest, features describing the fear of finality. I knew I would have to see it, regardless of what the standardized reviews said of it.

By the preview’s end, I had already begun the search. As luck would have it, Under the Skin was first a novel. This is not shocking. So many movies are novels. In fact, one has to wonder where the film industry would be without its less celebrated partner in crime. It seems most films of original content tend to fail–they lose story, character development, and structure. They become aimless and purposeless. And thus here we are, a decade of remakes and comic book films while the original ones are disseminated through various other outlets, and indeed, mediums. As it was, I decided I would let the words of the page work their magic on my mind before I’d allow the pictures on the screen to dazzle my eyes. Eyes are so often deceived.

There is no easy way to describe Under the Skin as a novel without spoiling it, so if you plan on reading it, then all you need to know is that the novel closely follows a young, attractive girl named Isserley. She drives her car up and down a highway in Ireland like something predatory, offering hitchers of solid physique a lift. That is all you need to know, should you not want the novel spoiled. 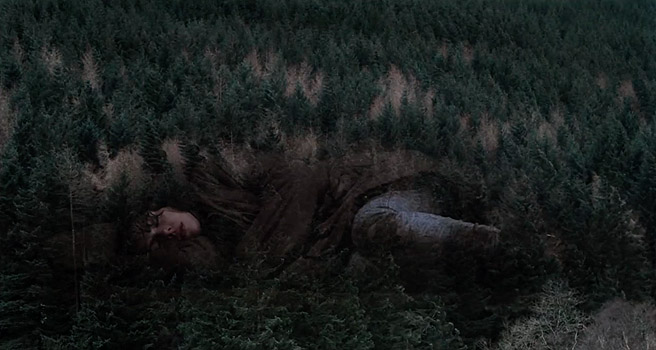 The retelling which spoils the novel begins NOW. The novel is written in third person with the inner thoughts of Isserley often pressing out from the page. The perspective does rotate occasionally, as Michel Faber, the author, routinely immerses us in the perspective of the hitcher Isserley has procured. Most all the hitchers notice her exceptional breasts, the cleavage of which she is not averse to exposing despite it being the dead of winter. Often they catalogue the mysterious size of her glasses, so big as to make her eyes appear magnified to humorous proportions. She sits with a bizarre, unnatural posture. Rigid. Stiff. Also off note, Isserley has scars in curious places. Her elbows and wrists. She’s an interesting, beautiful creature, if not a bit strange.

Isserley also catalogues the details of the hitchers in her passenger seat. This back and forth perspective realignment is an interesting element in writing that, when used well, often illuminates more than just thought. It can be a character study, a look at the humanity of people. And Faber does well with that in this novel, though I am almost never a fan of the method.

Before deciding on the hitcher’s fate, Isserley questions them on the basics–where are they going; how long have they been on the road–and then moves beneath the surface to expose the details of their life. Single. Married. Kids. No kids. Job. Jobless. She’s searching for those who may not be missed immediately, players from the fringe of society–a club hitchers so often belong to. If Isserley finds that the human in the passenger seat suits her needs she flips a small switch beside the steering wheel and the man in the passenger seat slumps over, their head resting on her shoulder. She pulls over and toggles another switch which makes the windows of the car impossible for an outsider to see through, then she procures a wig and glasses and places them on the hitcher. She toggles the switch for the windows and starts the car and drives back to a farm at the appropriate speed. Always at the appropriate speed.

This carries on for the first third of the novel—gathering hitchers, returning them to a farm.

The film is more dissimilar from the novel than it is similar. Isserley dons the title of Laura, though I don’t recall her name ever being uttered in the film. She pilots a van through city streets near dusk, searching for men–though not necessarily impressive in stature, as is her task in the novel–she may convince to hop in her car, her looks no doubt an aid to her cause. Her most common tactic is to ask for directions, then convince the would-be walker to accompany her. Once she has the passenger in the car, she engages in small talk. There is very little dialogue in the film–perhaps due to the challenge that is deciphering the Irish accent. She delivers the passengers back to a forlorn shack of a house and the two then proceed through a dark doorway. The room is pitched in black, a reflection of them on the ground, as though they are atop black glass. The man follows behind as Laura undresses, dropping her clothes on the floor. The man too undresses as he walks. Somewhere in his approach he descends into the floor, which is revealed to be water. Laura then leaves the room, the man left to look up from some sort of clear prison as she walks back over the solid, transparent floor. 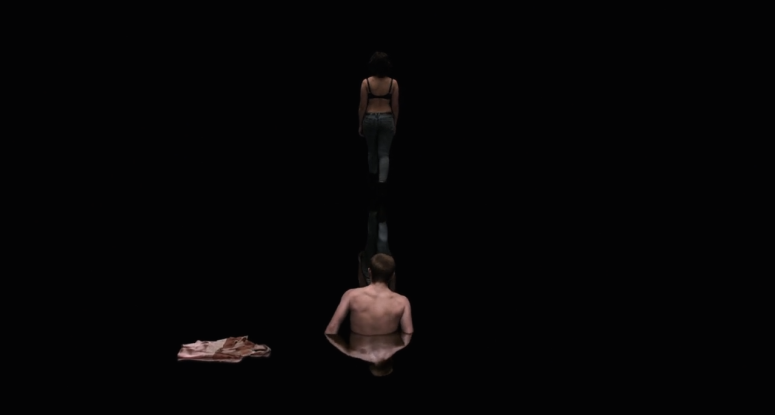 There are clues throughout the first section of the novel which encourage the reader to believe all is not what it seems. She is not a serial killer with fancy gear. She is something else. The scarring. The massive eyes. Her want for muscular men, which she and the other men at the farm begin to refer to as Vodsels.

The lead that had been buried isn’t a particularly stunning or satisfying pay off, but it works well enough. She is a creature from another planet, her form genetically modified to fit in the human husk she’s been ensconced in. Her eyes were the lone feature that couldn’t be altered, which is why she wears the comically large glasses, so viewers will assume her eyes are bizarrely large courtesy the lenses’ magnification. At the novel’s midpoint, she gets word that a fellow named Amless Vess will be arriving to the farm. Vess is the heir to the company she works for—her business of collecting humans. A radical back on his home planet, Amless is curious to know what happens at this bizarre animal farm. Isserley has no desire to meet him.

Upon arrival, Amless sets free some Vodsels. Men who have been shaved, trimmed, neutered and had their tongues removed. They are no longer the men they were, their humanity stripped from them through suffering in their cages. Through the torture they endure to be nothing more than tasty sustenance for the Alien race on a planet far away.

Isserley and the farmer round up the freed Vodsels from around the farm; then she confronts Amless. The Alien race to which she belongs are similar to canines in appearance, and indeed, sight of Amless enraptures her to his furred beauty. His long limbs and lush pelt and glorious eyes.

This key plot point in the novel fails to manifest in the film. Amless never arrives; there is no mention of him. There is no Vodsel revelation, save for a rather cryptic scene beneath water which I will not attempt to describe. Instead, Laura continues to collect men unrepentantly until she picks up a rather bizarre looking fellow with a mutated face. Her encounter with this man serves to be the equivalent revelatory experience Amless provides Isserley in the novel—the intent is to provide our collector a moral weight as to what she is doing. Taking lives.

The next important plot point is that of rape. Isserley is raped by a hitcher she picks up; Laura by a man in the woods. The weight of the moment fails to take shape in the film. In the novel, Isserley is devastated by it, though she won’t admit as much. Her behavior becomes erratic; she begins to fear for her safety and questions her ability to do her job—something she takes great pride in. She is a professional, through and through, and the crushing notion that she can no longer perform her job is almost her undoing.

In the film, Laura flees to the woods after failing to deliver the man with the mutated face. She fears who may come looking for her—perhaps her employer; just a man on a motorcycle gazing out over immense, untouched vistas which almost look otherworldly. Here she runs into a logger who attempts to rape her. As he claws at her, her husk like layer of skin begins to peel away, revealing a blackened alien. Then he kills her. 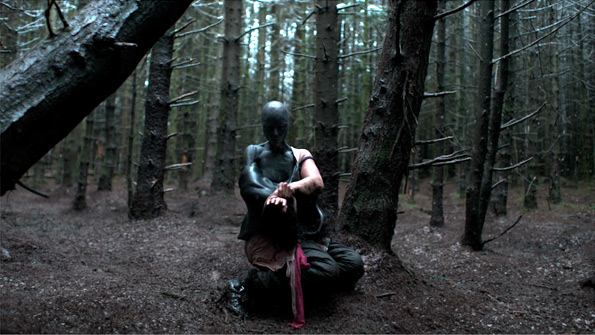 The book also reaches its finality in a somewhat unsatisfying manner. A car crash, and so afraid is Isserley of being discovered by authorities that she triggers a controlled explosion. End.

Arthouse films appeal to me. I love searching for the complex messages the writer/director try and deliver through visuals. So often your eyes are in for a spectacular array of imagery that won’t lodge itself from your mind’s eye for a good long while. And indeed, Under the Skin is no different. The images still remain with me. However, having read the book—one I really appreciate: beautiful, almost lyrical prose, vivid characters, etc.—I wish the film would have hung closer to the novel’s plot line. The plot was well engineered—trying to fill the narrative gaps with images as opposed to dialogue and action failed to deliver a cohesive story. Having said that, it should be viewed for the visual feast. A flood of disturbingly beautiful imagery which would make most movies of vast budget envious. The film is very much in the vein of Eraserhead—a film which has been puzzled over for nigh half a century. 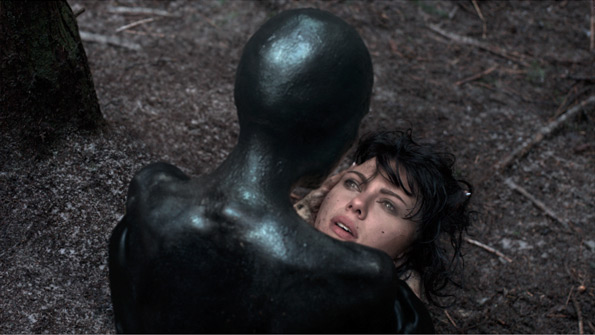