A brief snippet of erotica I wrote for someone a while back. For the laughs. Beginning to a much larger/stranger story that I will hopefully finish someday. First draft type stuff. 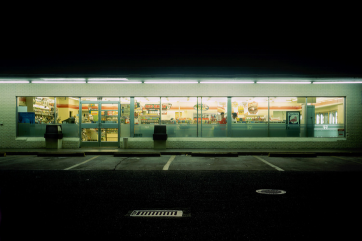 On a desolate section of highway, one seldom travelled or seen, there resided a small gas station with a convenience store in case a passer-by should be in need of fuel, for either vehicle or mind. William Witt had taken the midnight shift at this convenience store on the advice of his parole officer, with the promise that there would be little social interaction, and thus little angst or agitation. Manning the register in the midnight hours would be a perfect segue back into the world. And a different world it was. Life in the place he’d only just belonged to was one without choice and leisure, but back out here, in the real, choice and anything he may desire were at every corner. There had been other jobs offered to him but the pay was not equal to that of the midnight gas station. And he couldn’t resist the temptation to gain more money, and the temptation to remain on society’s fringes.

In the two weeks he’d worked at the convenience store he’d encountered but a few customers. Most would not even venture inside; they’d merely stand at their car, the air from their heaving lungs splattering into the cold air of the night, eagerly waiting for the moment in which the pump would discontinue its process. Even if a soul did brave the cold and cross the fifteen or so yards required to reach the convenience store, most belonged to such a drowsy state that they had no conversation to offer upon entry other than the courtesies and pleasantries that normal social interaction demanded. William would respond, almost hoping that the patron may strike up further conversation so that the desire to sleep may be staved off for another hour. Indeed, much of his time working the midnight hours was spent in a half state of consciousness, some place between dream and reality. His heavy lids would often fall to a near close, only to snap back wide as the dream world began to consume all consciousness. Despite his best efforts, dream often claimed him.

The saving grace of his drowsiness was the bell attached to the door, which would chime upon entry. His mind, even in a short time, had become conditioned to stir from the dream place at the sound of its jingle. It was not a slow and even pull from sleep that it offered. No, it was sudden and abrupt and total.

And such was the withdrawal he experienced as the clock moved just past midnight. His eyes snapped wide, and before him stood a girl in her mid-twenties, hair short and dark, face built of beauty. In defiance of this beauty was the state of her clothing below. Her torso bore a red sweater, which was shorn from heart to hip, her heaving stomach exposed and adorned with fresh cuts issuing trace amounts of scarlet blood.

William offered her another cursory glance, half to peruse the trauma that had befallen her, half to commit her beauty and distress to memory. For the pleasure of it all. Such a mental snapshot would be of value at a later, lonelier time.

She seemed to catch his gaze, and a subtle smile appeared for a single instance, only to vanish in the next.

The girl glanced around the convenience store.

“Yes,” she replied. “I…I was lost, so I pulled over.” Her gaze was trained beyond William, not on anything in the time in which she now resided but one already past. William watched her deep brown eyes saccade about, their bobbing and frenzied movement almost alluding to trance. The mind behind those eyes travelled someplace other.

“I pulled over and started looking for directions. And then…and then I guess…I guess I heard the door open? Did I? Was that what it was? Oh god, it was. It was the door opening. I didn’t know it in the moment, but I know it now. I can hear it clear as day. Do you think it was her? Would she open the door by herself? She knows better than that.”

Her attention refocused on him, eyes still and strange.

“I don’t know. Where were you?” William asked.

An odd and sudden flicker of terror moved through her every feature. She turned from him, her face more stone than organic, and then cast a long, slender finger upward, implicating the trees in the dark distance above.

She turned back, the horror on her face present no more. “I told you. I…I took a wrong turn. I got on a road that was heading into the hills. It went for so long…so long. I knew I was lost, so I pulled over to find out where we were. And I looked through the maps and directions I had, and when I turned back to my daughter she was gone.

“Please, help me. We’re wasting time. I called and called for her, but I heard nothing. No cries. No screams. No balling. Nothing.”

“I don’t know that I can leave the store unoccupied.”

“You couldn’t do that for me?” she asked, a peculiar tinge of seduction permeating her tone.

“Well…what can you do for me? I could lose my job if I leave the register. I need this job. I’m new here.”

The girl began to survey the store once more. Her visual excursion ceased at the restroom door, and then snapped back to William.

“I can make it worth your while. Please, help me.”

She nodded her head, another slight smile slipping across a face that wore distress like some unconvincing mask. She then stepped toward the counter and leaned in close, her distance so near that her delicate lips were nearly upon his cheek.

“Please. We have to be quick. For my daughter,” she whispered.

Gathering the gist of her words, William moved out from behind the counter, blood pumping to all places both wanting and requiring its nourishment.

Again, the faintest flicker of a smile. “Does back there work?” she asked, pointing to the bathroom.

“Yeah, that will do just fine.”

She grabbed him by the hand and led the way to the bathroom. The pace of her stride was not one of a woman in want of haste. She seemed to revel in the moment, the role of being his temptation for the night.

Once in the hallway in which the bathroom resided she turned back to him and smiled and then forced her lips against his. The passion inspired his heart to beat faster, to push blood harder. He shoved her through the door with a long forgotten aggression—an aggression that had been disciplined out of him. Its resurgence felt natural, felt like the return of a savage power. The physicality of his gesture seemed to excite her further; she pushed her hips into his, grinding hard against his anatomy. Perhaps satisfied with the information the closeness yielded, she stepped away from him and offered another discreet smile. As if sensing his desire, she grabbed his hand and placed it upon her breast. Though it had been some time since his hand had last been upon a breast, it seemed to remember the required tricks, teasing and squeezing in confident intervals.

His hand remained kneading her, obsessed with the perfection it grasped, all the while the forceful affections continued on. In the heat of all this passion she began removing the clothes of both participants. And as she stripped him down her hands displayed the same inquiring nature that his too possessed, investigating and caressing all the right things. First soft, then with vigor. The aggression of her hand brought with it pain, but her touch turned pain into pleasure. In this moment, she was everything he could ever want and desire.

“What’s your name?” William asked, the question posed more out of want to mitigate the brimming excitement than out of general curiosity.

“I always dreamed of fucking a Lexi.”

He nodded. “Don’t…don’t you want to what my name is?” William asked.

He was half embarrassed to answer; the desperation of his questioning was shameful, the flush and heat of his cheeks direct testament to such emotion.

William spun her around and forced her against the wall, his strong arms holding her there with an authority she would not be capable of denying. She offered no resistances to this oppression anyhow. The wide stance of her legs all the invitation he needed. He positioned himself a comfortable distance behind her.

“We have to find my daughter,” she said.

He forced himself inside.

Again, a feeling he hadn’t experienced in a length of time he’d rather not have acknowledged. But the feeling was bliss. It mattered little if she too derived the same enjoyment from his thrusts, from his aggression against her turned body. She issued near silent wails as his body forced her into the chilled tile of the bathroom wall in steady and strong intervals. Though only the side of her face was exposed, shrouded partly in shadow, it was easy enough for him to gather her lack of enthusiasm at this agreed upon deal. There was no bliss; no trace of pleasure. The affair was one sided.

“For my daughter,” she whispered after each thrust, perhaps trying to requite whatever guilt may have been flooding her heart.

“For your daughter,” William said, trying to belie her fears so that the connection may continue on.

And as his excitement continued to gather, so too did the dynamism of his imagination. The thrill of her bare body pressed against the cool tile soon diminished, and his mind, the powerhouse of industry it was, immediately directed her into a different position which could continue to satisfy his excitement in a way he deemed appropriate. She was now bent over at the waist, both heels and palms flat on the floor, her right hip the location of his right hand, her head bent back under the force of her long, golden hair being commanded by his left hand.

And still she continued reciting, “For my daughter,” in near silence, almost so low that at times he thought it to be a moan of ecstasy. Perhaps the recital had indeed fused into something encompassing both desperation and pleasure.

But his body soon tired of the sameness of this bent position, and once again his mind was rendering invention. There were no less than three changes of position and anatomy, variations of all manner of angle and submission, each variation occurring when his body would tire of the routine and when his eyes tired of her body’s adaptability to each extreme. Indeed, most enticing in regards to each new position was the struggle her body underwent to satisfy its rigors. It was only once her body adapted to the pain that the pleasure of it was no more.

More curious than his stamina, which prior to entering her he had silent concerns over, were the changes in mood she underwent as the copulating continued on. She soon abandoned reciting her daughter’s name and, even with her taut hair pulling her head back so that it nearly folded onto her upper spine, she managed the same tempting smile that had lured him inside her in the first place. Occasionally, after a primal thrust would rattle her body entire, she’d turn back to him, her hair twisting and knotting in his grip, and display the tempting smile in full to him. The gesture served only to amplify the speed and aggression with which he thrust his hips.

The invention of his imagination.